Particles exist at a specific energy `level’ for three reasons within QTP. The level must first be closely equivalent to the particle’s actual mass-energy and second the particle must be constructed as some spatially allowed dynamical structure by its substructure. These two conditions apply within both QTPP and classical particle physics. A third condition, unique to QTP, requires that particles can exist only at energy levels `allowed’ by the doubling process of decay from the Planck scale. This defines the set of possible particles and forces which QTPP has demonstrated correspond to the observed values, and allows detailed study of their structure and properties not possible within classical particle physics. As shown, QTP involves 3-d spatial particles embedded within 3-d time. Galaxies are then connected to time by a relative near light speed flow which, by aberration, reduces the connection to 4-d by folding 3-d time into a `nearly’ 1-d fuzzy timeline (also generating the uncertainty relationships). At our very local level the simple doubling process in QTP is all that appears to be needed. The basic reason 3-d spatial `particles’ must exist (and operate with continuous spatial physics within the 3-d temporal pattern) is to allow continuous dynamical decay while retaining temporal commonality (simultaneity in Fermi statistics) so quantum decay (temporal Bose statistics) can proceed from the birth of time. Within a spatial particle, including galaxies, Tau space (3-d time) perceives time to be the same or spread (as a spatial Sigma space) over a very few closely spaced interlinked `planes of time’ within which, and only within which, our conventional spatial forces apply.

The structural pattern of levels and transition energies suggest that certain particle generation and decay processes should be discernible, with the decay of the kaon of particular interest. Two different decay modes are present for the kaon neutral form, a unique property of this particle. The lead figure for this topic contains two energy level patterns from book figure 4.11. (For book information or acquisition see Post001 and Post002.) They suggest origin and decay paths for both the charged and neutral kaon (K) forms including the particle anti-particle level shown as K K-bar. Before tracing the processes some commentary concerning levels and transitions is required.

In QTP energy levels are direct specific fractions of the doubling decayed Planck energy defined at the birth of time. They are effectively quantized `potential energy’ decay levels of the universe with which particles or redshifts must conform to exist. From the viewpoint of spatial perspective, continuous relative motion or spatial field effects can combine to distort their spatial (but not temporal) energy. QTPP levels are `rest’ energies conforming with a particular level undistorted by `external’ forces (but including internal binding which, of course, is a part of a particles ground state rest energy). In cases related to initial 3-d or 4-d structure formation, as discussed for the Zo and W gauge bosons, only such a potential energy transition may be required. Transitions involving a change between 4-d and 3-d existing forms involve a transition between Pi and Gamma energies involving the neutrino. The neutrino accounts for addition or deletion of the 4th temporal dimension. Some transitions may not connect directly with a particle. They are potential `available’ limited energy steps because of temporal commonality between spatial particles. Excitation or decay in space may draw upon such temporal potential energy intervals which fit particle energy decay paths. Transitions to kaon levels from levels Pi 63.33 or 64.33, in the lead figure, are of this type and may or may not be part of decay patterns from higher energy forms which are known to generate kaons as they decay. All such paths which end at the kaon are equivalent in that sense, and deposit a kaon of energy into the level. Transitions are pure energy shifts and do not convey structure or properties such as charge. Such properties are part of the particle structures themselves which can match and reside at temporally defined levels. A final decay path of a particle within a level is determined below the level which receives the energy. In the kaon case two paths appear to be available for neutral Ko decay. One yields the KoL (L = `long’ slow decay like the charged forms), the other the KoS (S = `short’ rapid decay form).

It will be useful to refer to the terminal figure in Topic021 to follow the discussion of levels and transmissions which follow. The figure is repeated herein as a terminal figure at the end of the text. However, most transitions of particle anti-particle energies are shown only in the leading figure herein or one case marked with an asterisk in the Topic021 figure. Beginning with the left frame of the leading figure or the Topic021 figure, production of normal charged kaons appears to proceed as follows. Note that level Gamma 63.33 is incidentally the point where the charmed quark enters making kaon production possible. A transition from level Pi 63.33, or its equivalent, deposits one kaon of energy into level Gamma 64.75 (level K K-bar) which presumably drops to Gamma 65.75 yielding a charged kaon pair by charge conservation. Alternatively a transition from Pi 63.33 drops to Gamma 65.75 yielding the charged pair directly (not shown in Topic021). These processes seem to be indistinguishable, the lower one simply representing the actual processing of the decay. As shown the continued drop to level Gamma 66.00 now generates two pion decays associated with the individual charged kaon decays in the same type of split decay form that yielded the charged kaons. Alternatively the muon may replace a pion and a neutrino enters because of the change from 4-d to 3-d particle form.

The decay process in the right frame of the leading figure involves an initial decay from level Pi 64.33 . The upper transition to the basic kaon Gamma 65.75 level is insufficient to produce a normal kaon pair. It can, however, produce the KoL neutral form which follow the same decay path with an extra pion from the excess energy. This describes the standard 3 pion decay of the KoL which decays only slightly slower than the charged kaon’s 2 pion decay from the identical level noted above.

The normal alternating pattern for the light mesons, shown in the terminal Topic021 figure, shows that each factor of two meson anti-meson split to the individual meson level is followed by a new meson anti-meson pair. K follows F or the pion follows the eta meson for example. Thus, Gamma level 66.75 following the kaon Gamma level 65.75 could be an a meson anti-meson pair which I denote as x x-bar in the right frame lead figure and an asterisk in the Topic021 figure. The x meson should not exist since it falls below the `muon limit’ (shown as the line above Gamma 67.75 which would be the x meson level). However, the x x-bar level (247 Mev) can exist consistent with the limit as a pion + muon decay (140 + 106 Mev). Now it is easily seen from the right lead figure that a `direct’ deposit of a Ko energy into the x x-bar Gamma 66.75 level from Pi 64.33 (dashed in Topic021) is identical to an x x-bar energy deposit into the Gamma 65.75 kaon K level EXCEPT the lower receiving level is presumably highly unstable so a more rapid KoS decay can result. Since one Ko energy was passed in this lower transition a normal 2 pion decay of the KoS can follow, and due to x x-bar instability enhanced electromagnetic decays of the KoS may be expected and apparently seen. It seems that there are clearly two not quite equivalent Ko decay paths possible which seems consistent with the Ko S and L distinction. This is one of my more far-out suggestions, but perhaps a good way to end my discussion of QTPP before returning to cosmology. 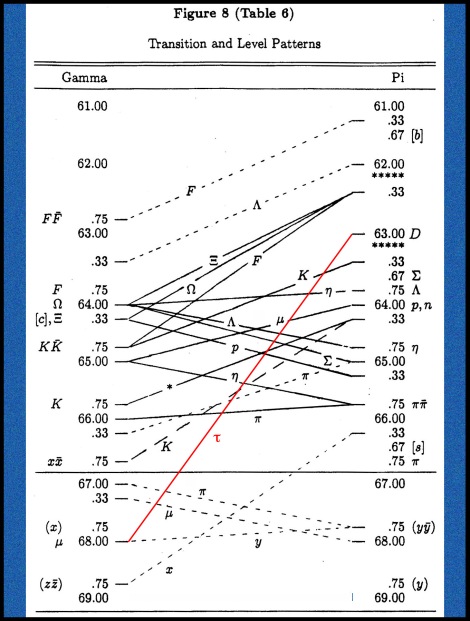